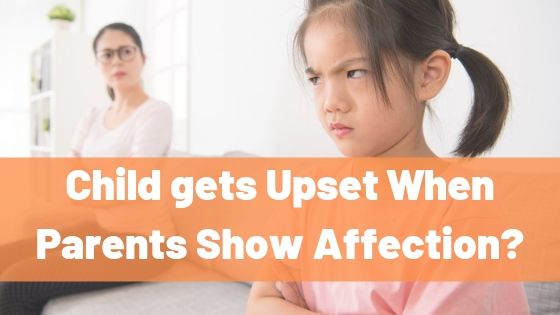 Normally emotional attachment of your child with parents is really important. But what if your child gets upset when parents show affection towards each other?

Although it’s something most parents can relate to this doesn’t sound like normal at all.

Although jealousy can be developed in kids really early, significant signs of jealousy would be witnessed when the child reaches 3 years of age.

It’s not only you, but there are also people who complain that their kids get mad whenever the couple kiss, hug or show any kind of affection towards each other.

But what exactly makes your child react this way?

It’s important that we look into the root of the problem before we address it. Thus we need to know the reasons behind this fierce behavior of your child in a scenario like this.

Why Your Child is Getting Upset?

He had more attachment with one Parent

One most common and the simplest problem is that your child feels more attachment towards one parent.

Your child wouldn’t like you to show love for anyone else, even if the person is your spouse.

This makes him feel jealous of your partner and your child would envy the time, love and importance you give to your spouse. 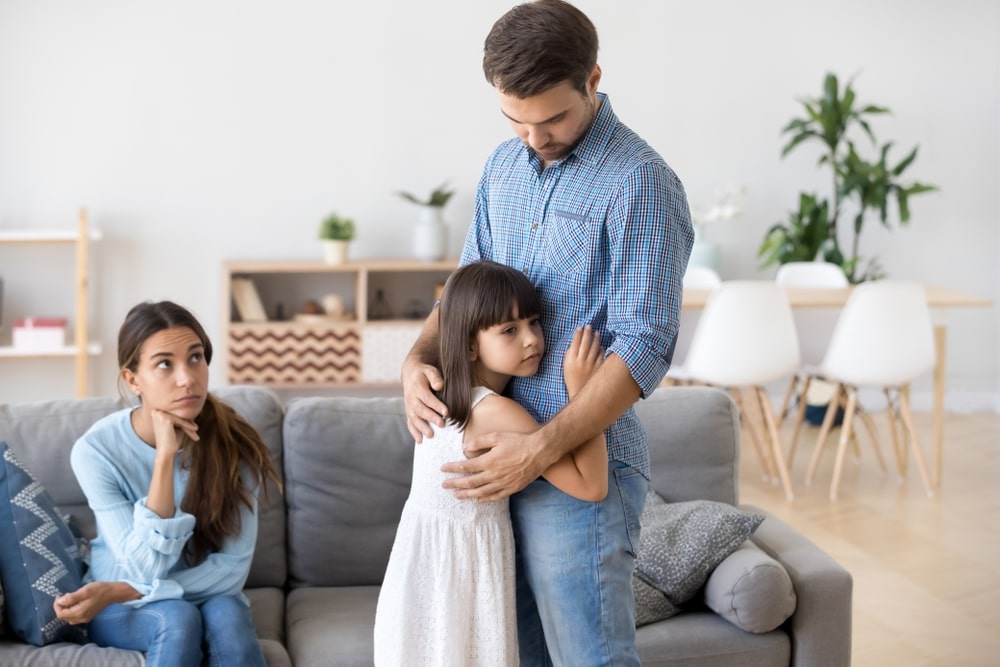 There can always be an imbalance in who the child loves more and it’s pretty normal.

But the condition we are talking about here is generated when there’s a huge disruption in-home routine. For example; one parent left home for a long period of time, etc.

He feels neglected by the Parents

Another thing can be that the child feels neglected by the parents.

If the child starts crying as soon as you kiss or hug your partner, it’s definitely a sign that your kid wants more attention.

This doesn’t necessarily mean that you aren’t giving him enough attention already.

Children can be stubborn sometimes.

Maybe both of you have been cuddling and playing a lot with your child in his toddler years and now it’s hard for him to digest that you give each other importance.

Near to your kid, you are devaluing your kid by valuing your spouse. Even in such a small act, he’d start feeling abandoned which would make him upset.

He just found it Disgusting and Gross

One more reason (as seen in most cases) is that children think that their parents shouldn’t kiss each other as it’s kind of ‘Disgusting’.

At this age, they aren’t good at expressing feelings and are unaware of many things related to making love. 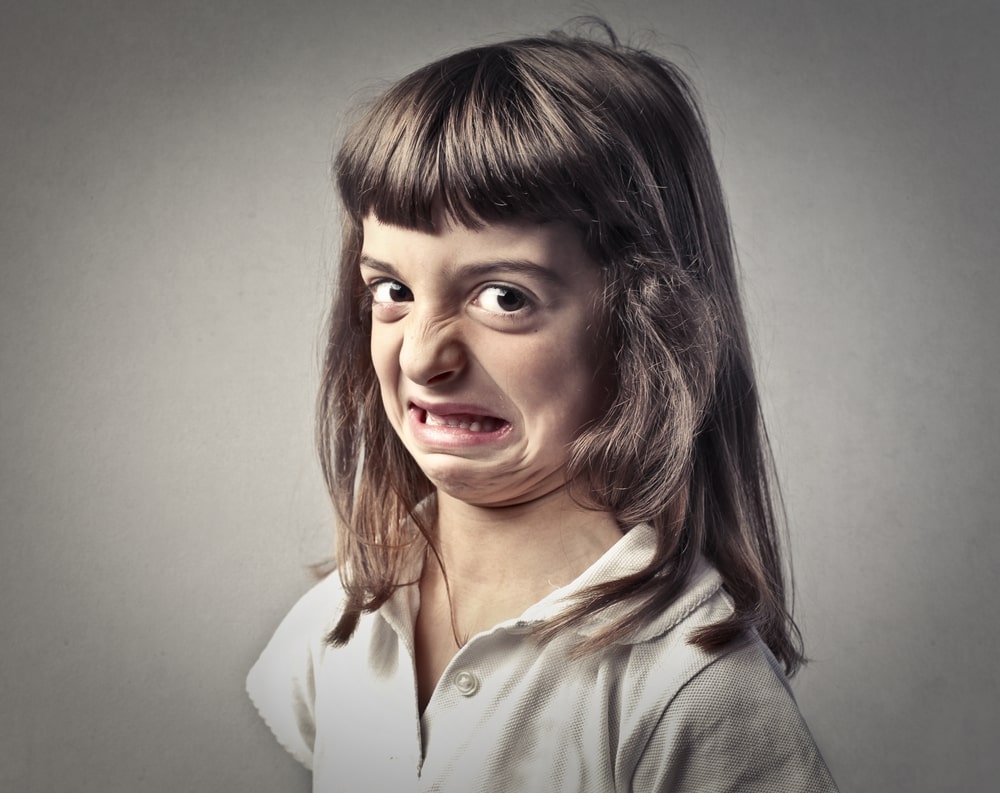 That’s why they’d find it weird for their parents to kiss or hug each other. Note that usually, daughters are more attached to their fathers and boys to their mothers.

Hence it’s possible that kids look at the parent of the same sex as the wrongdoer in this case.

What Should Parents Do?

Don’t be held down by your child

Before taking any step you need to be warned not to submit to your child’s will. Most of the parents make the mistake of giving in when their children protest against anything they do.

For example in this case, if your child cries or screams when you affectionate your partner don’t surrender to him.

This generally has a correlation with if you’ve raised him as a defiant toddler and have been feeding their stubbornness.

Thus it’d be important not to act upon their words any further.

For example; don’t let your child sleep in your marital bed if they are doing it just so you couldn’t sleep with your spouse.

It would make them feel that they’re right and they’d continue this defiant behavior.

Find out which Parent is he Jealous from

Children would always have an imbalance of attachment between their mom and dad. And you can take advantage of their unevenness of love towards you.

In a scenario like this, you’d easily find out that your child is overprotective towards one parent and shows anger towards the other. So first determine who he cares for more.

This would help you decide who communicates to the child to explain everything to him.

If your little boy thinks Dad is a monster who’s stealing my Mom, probably Dad should take a little side while Mom tries to change his mindset.

Give him a talk.

The next and most important step is to talk to him. All you need to do is to sit down with your child and have a serious conversation.

You’d need to be clear in your words and point out the matter directly.

For example; use phrases like; “Mommy and Daddy love you and love each other as well”. “You are hurting your Parents by showing upset when we affectionate”. 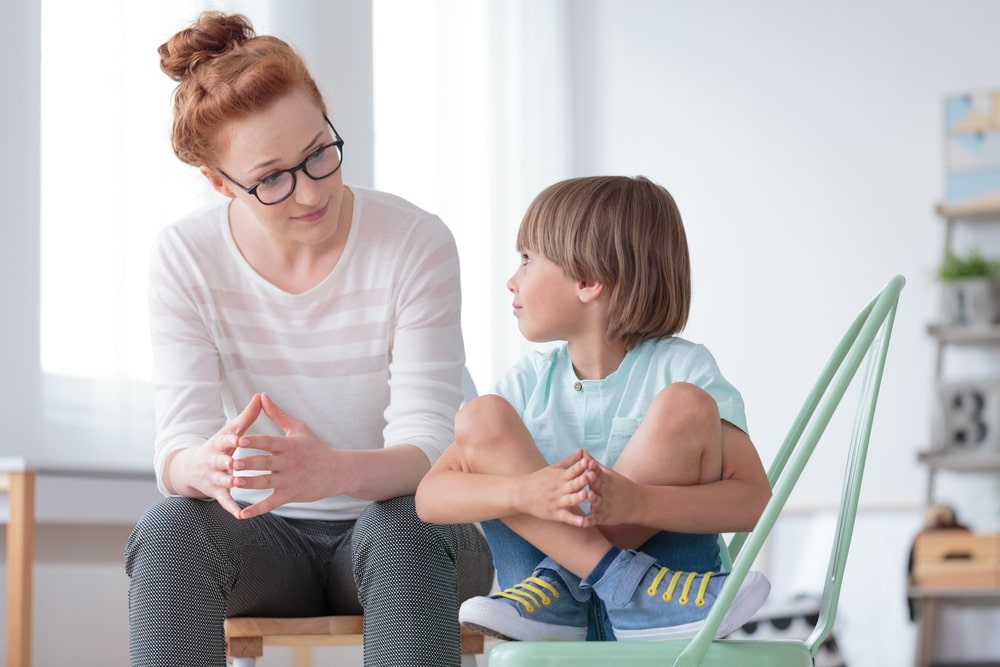 Make sure you choose the right sentences and deliver them smoothly. Showing anger against your angry child would only change this discussion to a heated debate.

Just try to explain to him gently where is he going wrong and talk in a way that he feels an emotional connection, to which he couldn’t resist.

One good tip is to use words like; Honey, Sweetie, etc. while you talk to him.

Try to Equalize the Child’s Affection towards the Other Parent

Till now you’d have found out which parent your kid isn’t attached with properly.

While you are doing everything else to bring a change in your kid, make sure you try to equalize the Child’s affection towards the neglected parent. There are plenty of ways to make it happen.

For example; that parent would need to spend more time with the kid. This would be easily possible when the other parent isn’t around.

Just play with him, talk to him, take interest in his matters, give him value and offer help whenever he faces a problem.

That’d be enough to spark the emotions in the child and you’d feel the kid being closer to you. Hence the kid would have affection for both of you, and won’t mind you two spending time together.

Engage the Child in to make him feel Valuable

A mistake that many parents make in a case like this is that they show annoyance to their kids.

You don’t want to exclude your kids from your love. It can have severe effects on the kid and might get a serious syndrome for life.

At this young of an age, he may feel like he’s not loved enough.

Approach your kid in a way that he feels more engaged. He should be given love, respect, and importance from both of you.

For example; do group hugs and group kisses with your spouse and child. Thus your kid would find him valuable in your eyes. 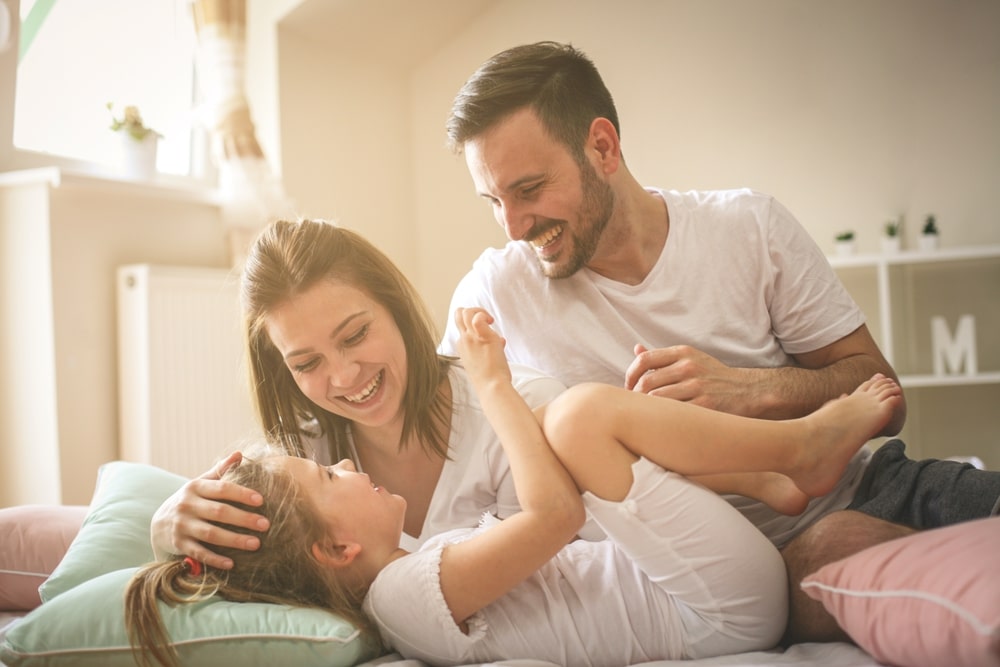 Take your child out and have some family time with him. Make sure you three spend enough time together in a day that a strong bond is formed and the kid enjoys that company.

But there are definitely occasions you’d need to have separate time with your partner, which brings us to the next tip.

Allocate Separate time for Your Partner

Just as important spending family time is it’s necessary that you allocate separate time for your partner only.

You don’t want your kid to feel like only you three should have time together. Have dinner with your partner only sometimes, bring a gift for only him some time, etc.

This would make your child understand that you two have a life as a couple as well. And thus he’d know where to interfere and where not to.

If you’ve been doing everything correctly, allocated time for your child separately, talked to him over the matter, etc.

And there is still resistance and protest when you affectionate with your spouse, it’s better to ignore it. Staying calm with their anger or protest sometime can help them control their anger.

Note that this doesn’t mean not talking to your child at all. You should tell him that he’s doing the wrong thing by being an obstacle.

But valuing your child’s protest against your affection towards your partner every time would make him stronger and confident in doing so.

When you don’t value the negative behavior of your child, you should definitely acknowledge his positive conduct.

If your child is not being resistant, you should tell him that he’s doing well. 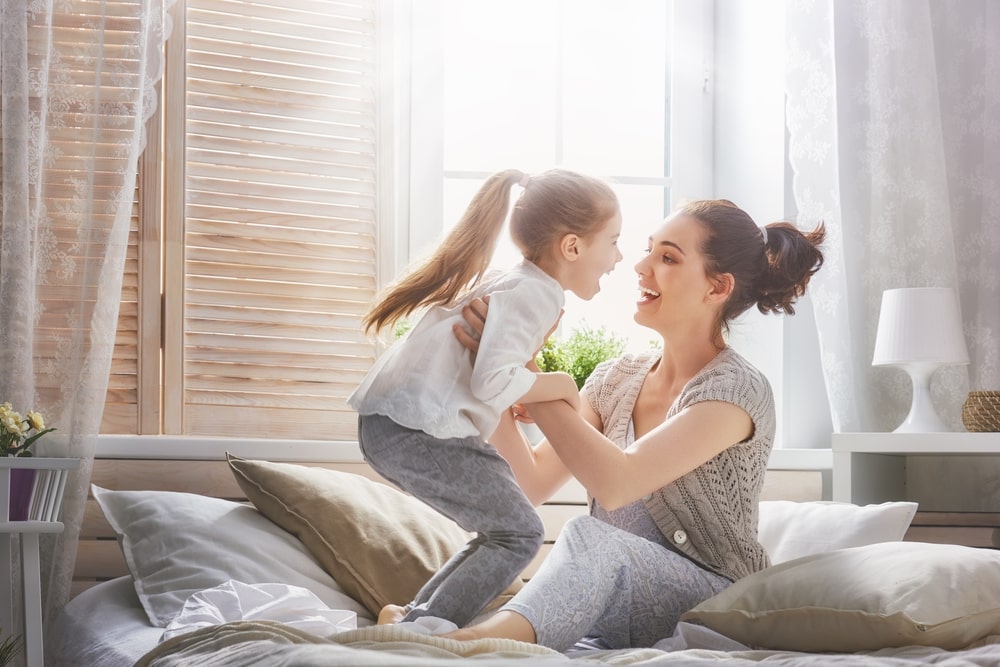 For example; if he leaves you two alone to have some time for each other, you should say something like; “I can’t thank you enough for this honey!”

Praising your child has a strong impact in bringing a positive change in his behavior. Thus recognition and positive words from you would make your child practice more of it.

Although you should take this matter seriously and take some steps to make your child understands.

But at the same, you need to grasp the fact that this behavior is normal. Children go through this phase and a lot of parents deal with this.

Hence there’s nothing for you to be worried about.

As your child grows a little old, he’d start understanding emotions better. That’s the time when he would start acting normal and this behavior wouldn’t survive long.

The only thing you need to be seriously worried about is that your child doesn’t hit you.

Otherwise, you’d need to forbid him a little aggressively. But since it’s not the case here, the tips shared above would do the job pretty well.

READ MORE: What if Your Toddler Throws Toys Instead of Playing?